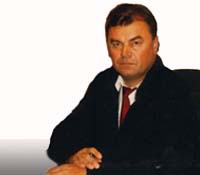 The SRW-AMESTRA GmbH with headquarter in Pforzheim was founded on the 29th May, 1989 by Raimund Wolf. Almost at the same time the industrial enterprise AMESTRA was bought from him, with location in Illkirch-Graffenstaden/France. Here our main product groups are made until this day. We are specified on quick change-tool holders MULTI.... SUISSE, chucks, 4 jaw independent chucks, precision dead and live centres, VDI tool holders (DIN 69880) as well as other 4000 articles.

By the high precision of our clamping tools the enterprise has acquired to themselves a very good call over the borders of Germany.

After the death of the company founder Raimund Wolf in the year 2005 his daughter Michaela Wolf took over the management.

We use cookies
We use cookies on our website. Some of them are essential for the operation of the site. We don´t use tracking technologies. You can decide for yourself whether you want to allow cookies or not. Please note that if you reject them, you may not be able to use all the functionalities of the site.
Ok Decline
More information | Imprint